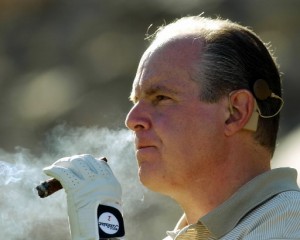 In a Cap Times Editorial this past Saturday...

________
Syndicated talk radio host Rush Limbaugh got so upset over the testimony of Sandra Fluke, a Georgetown University Law School student who highlighted concerns about limits on access to contraception, that he attacked her as a “slut.”

When concerns were raised about the conservative commentator’s language, Limbaugh doubled down and restated his attacks on Fluke.

Fluke has ably defended herself in interviews on national news programs. She’s a strong young woman who has proven herself more than equal to the task of responding to a shocking assault on her as an individual — and on her right to speak as an American citizen.

While Limbaugh certainly owes Fluke an apology, the fact is that the radio host owes a broader apology.
Limbaugh attacked Fluke for speaking up before Congress on an issue of national concern. Fluke stepped into the limelight not as an entertainer or a political player. She did not seek fame or fortune.

She spoke up as a citizen. And that’s what is so unsettling about Limbaugh’s crude language and cruder stance as this controversy has exploded.

Prominent political players and media personalities can get pretty rough with one another. No one is objecting to the give-and-take that characterizes electioneering and governing. This is not about constraining the discourse, or even about promoting civility.

What is at stake here is something that does far deeper, and matters far more.

When prominent political and media figures use their positions to attack individual citizens who dare to speak up about controversial concerns, they do not just attack the citizens. They attack the basic premises of a representative democracy in which citizens do not just have a right to freedom of speech. If the American experiment is to work, citizens have a responsibility to speak truth to power. It is not easy to do that. But it is necessary if we are to keep alive the founding principle, as articulated by Thomas Jefferson: “Whenever our affairs go obviously wrong, the good sense of the people will interpose and set them to rights.”

At a point when political players, most of them men, were going obviously wrong with regard to policies affecting women, Sandra Fluke spoke up. She performed a necessary duty of citizenship.

Citizens need to challenge their political leaders — and the media echo chamber that amplifies the self-serving messages of those leaders. We have enough of a problem in this country with the media’s casual dismissal of the voices of the poor, working people, people of color, trade unionists, rural Americans and the young. When the dismissals turn aggressive and unforgiving, as was the case with Limbaugh’s attack on Fluke, the promise of citizenship is assaulted.

And when elitists as powerful as Rush Limbaugh seek to silence citizens so sincere and appropriately engaged as Sandra Fluke, with personal attacks, crude language and constant criticism, those elitists attack democracy itself.

Share your opinion on this topic by sending a letter to the editor to tctvoice@madison.com.